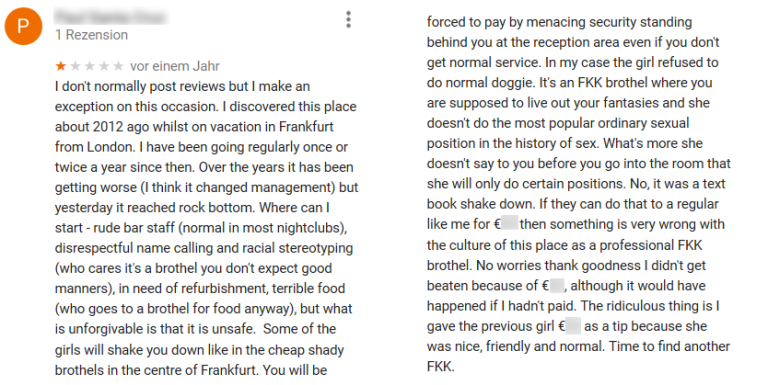 „I don’t normally post reviews, but I make an exception on this occasion. I discovered this place about 2012 ago whilst on vacation in Frankfurt from London. I have been going regularly once or twice a year since then. Over the years it has been getting worse (I think it changed management), but yesterday it reached rock bottom. Where can I start – rude bar staff (normal in most nightclubs), disrespectful name calling and racial stereotyping (who cares it’s a brothel you don’t expect good manners), in need of refurbishment, terrible food (who goes to a brothel for food anyway), but what is unforgivable is that it is unsafe. Some of the girls will shake you down like in the cheap shady brothels in the centre of Frankfurt.

You will be forced to pay by menacing security standing behind you at the reception area, even if you don’t get normal service. In my case the girl refused to do normal doggie. It’s a FKK brothel where you are supposed to live out your fantasies and she doesn’t do the most popular ordinary sexual position in the history of sex. What’s more she doesn’t say to you before you go into the room that she will only do certain positions. No, it was a text-book shake down. If they can do that to a regular like me for X euros, then something is very wrong with the culture of this place as a professional FKK brothel. No worries, thank goodness, I didn’t get beaten, because of X euros, although it would have happened, if I hadn’t paid. The ridiculous thing is I gave the previous girl X euro as a tip, because she was nice, friendly and normal. Time to find another FKK.“

In 2013 two young Romanian women were found to be prostituted inside the „FKK Oase“, who had been controlled and exploited by a violent pimp.