Fucked till she displayed disgust 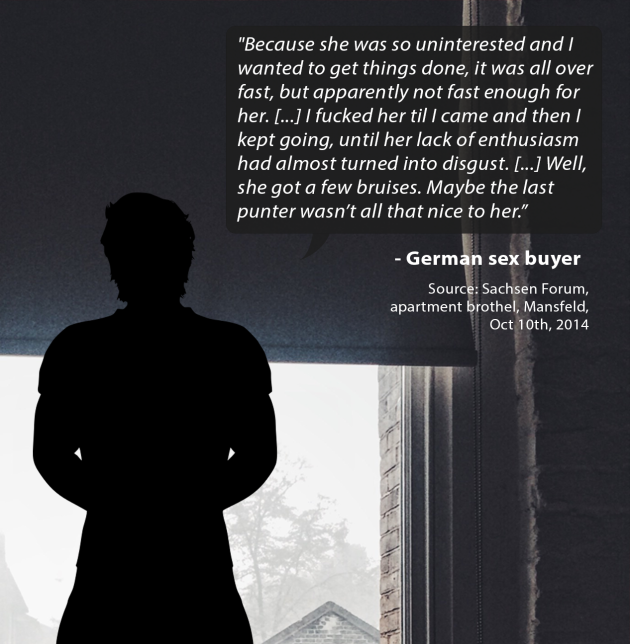 Original Post: „Salve, on October 9th, I went to visit Lisa-Marie*. She works in a district in Mansfeld and you can find her via Kaufmich. Booked a one-hour appointment. Cost me X euros. I got her address within half an hour of the appointment via SMS. So far, so good. She came to pick me up from our meeting place and took me to an apartment. Gave her the money at the front door. She threw it into her mail box. For safety reasons, she explained**. In front of the apartment door she suddenly changed her price. It went up from X to X for the full hour, because supposedly the discount had run out yesterday. X euros for 60 minutes is still cheap, I thought.

So, I handed her the cash and we entered the apartment. Her working space was an empty apartment, not even a proper lock on the door, it’s just kept in place by a broom. Had to smirk a bit at that. The only furniture piece present looked like an under-sized bed, which she hurried to get onto. She’s definitely not a beauty. But I didn’t let that scare me off.

When I laid down on the bed, which was too small, she immediately began chit-chatting at me. All sorts of stuff about her occupation, all the guys she’s gotta have intercourse with, little kids that are supposed to watch, etc. I began fondling her, she didn’t do anything to get the mood going. A few minutes later she gets to work on getting my little wild thing hard. She refused to do a blowjob though, even though we had previously agreed on this. I was freshly showered, which I think is only appropriate. She wasn’t, but what am I to expect for only X euros?

When we got down to action, she tried pulling me on top of her. I stopped the whole thing and asked her what she was trying to accomplish. Her answer: ‚I thought you wanted it without rubber on.‘ Definitely didn’t want that. When I asked her for a condom, she answered: ‚Ain’t got one.‘ I’m not stupid of course. I always got condoms on me. Because she was so uninterested and I wanted to get things done, it was all over pretty fast, but apparently not fast enough for her taste. Cuz I’m a pig. So, I put my nutsack right into the rubber. Had the same effect as a cockring.

Fucked her til I came and then kept going, until her lack of enthusiasm had almost turned to disgust. Pulled off the condom. Put it on the window sill, got dressed and left. Drove home and took a shower right away.

Conclusion: Won’t ever go back to her again. Booked her for an hour, was out of there after 40 minutes.

Dear fellow pokers, keep your hands off of her, because surely someplace else you can get a clean apartment and woman who is not totally uninterested and bothers to shower.“

Commenter 1: „On her ad picture it looks like she’s got a circle around her eye.“ 😀

Commenter 2: „Well, she’s got a few bruises. Maybe the last punter wasn’t all that nice to her.“

**Prostituted women are frequently robbed of their earnings by robbers and sex buyers. 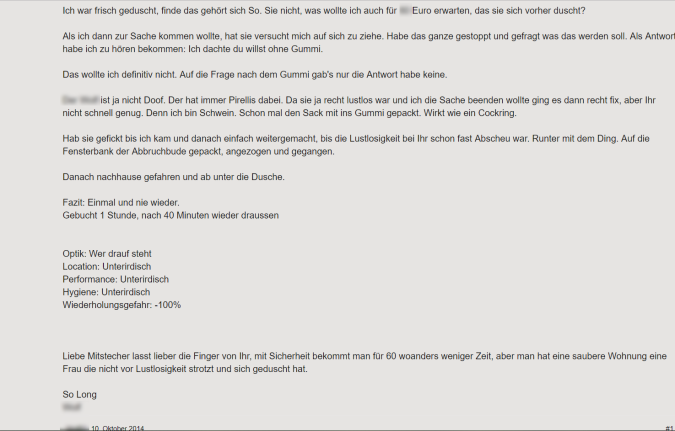